How Learning to Code Changed My Career

I’m naturally very curious. But little did I know that this curiosity would lead to a major career change here at RichRelevance. I first came to RichRelevance in June 2012, when I was hired as a temporary office assistant to help with a San Francisco office move.

Earlier that year, I read an essay called “The New Girls Network: Women, Technology, and Feminism” by Shireen Lee, which highlighted how young girls don’t “see the connection between technology jobs, which tend to be highly specialized and solitary endeavors, and changing the world,“ and that “women tend to be users more than creators of technology, wheras men are as much creators as they are users.” This troubled me and sparked my desire to learn more about how to become a creator—rather than just a user of technology.

On June 17th, two weeks after starting my office assistant job at RichRelevance, I attended an “Intro to Web Dev: HTML & CSS Workshop” put on by Girl Develop It. Surrounded by other curious ladies as I toyed around with HTML, I remembered that I had created a homepage in high school. In 1999, I made a page with dancing animated monkey gifs and a MIDI of the song “Funky Town.” It was fun to revisit something as an adult, that I had considered a hobby in my adolescence.

In June, I attended a volunteer orientation for CodeEd.org, an organization that teaches middle school girls how to build websites with HTML, CSS, and JavaScript. After the orientation, I chatted with a software engineer from Flixster, who casually said “if you’re interested in becoming a software developer, you should think about applying to Hackbright Academy.” She had been a guest speaker at Hackbright and would recommend it to any woman wanting to learn how to program.

I applied that night. At the end of July, I had been accepted with a full scholarship!

For 10 weeks I was immersed in Python program. It was fantastic to build a close network of women from all walks of life—with backgrounds in publishing, engineering, architecture, biology and literature. We were all there together making a career shift, taking a risk, and leaving our jobs to learn how to code. We spent 5 weeks pair programming and 5 weeks working on a personal project. We became very close and very supportive of each other. I came out of Hackbright with a sense of accomplishment. 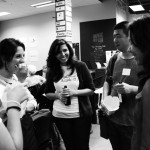 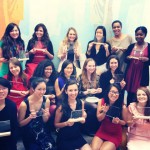 While attending Girl Develop It workshops and Hackbright Academy, I started wondering if my continued development in coding could lead to a career change and a chance to actually work on product. After graduating from Hackbright, I applied at various companies, but nothing felt right. I was trained to be a software engineer, but I had a strong interest in using my communication skills in a customer-facing role. I thought back to my time at RichRelevance, where I kept the office running smoothly as an office assistant, but had also helped the support team with documentation projects. I decided to reach out to Lisa, our Customer Support Manager, about future openings and we found an ideal match with a role on her team, as a Technical Customer Support Analyst.

I returned to RichRelevance on February 11th. It’s been such a warm homecoming and it’s great to be a part of a team that thinks outside of the box and has allowed me to jump right into a technical role. In this role, I have the privilege of working with various teams to solve problems, learn about our products and to be a connector. I’m so happy to feed my innate curiosity with a role where I’m learning and investigating every day, and I’m definitely happy to be home!