It all started with a cheesy holiday party invitation featuring cartoon-style ice skaters carving the words, “Cool As Ice” on a pristine San Francisco winter day (meteorologically impossible to freeze anything outdoor in SF, let alone an entire body of water). Just your standard holiday get-together with co-workers, right? Wrong. The only rumor floating was that there would be a “special guest…”

If you were one of the few who knew the 1991 movie reference, you could probably decipher the code. But with the ambiguity behind the reference, “Cool As Ice” quickly became an internal scavenger hunt for who the “special guest” would be. Despite the blatant clues, no one even thought to consider the 90’s rap superstar… 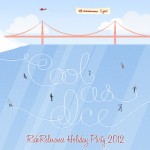 Several times before the party, the marketing team received emails asking, “Hey, I just saw Brian McKnight on the corner Market and 3rd, is he our special guest?” or “Is the guest gonna be Tony Bennett (I left my heart in San Francisco)?” One person even bribed me $100 to find out who the guest was! (I should’ve taken it…) One person guessed right. But that’s one out of 250+ employees, and there’s no way he would’ve guessed that Young MC, Rob Base, Tone Loc, and Coolio would also be there! The party was officially my childhood dreams come true – a smorgasbord of old school hip-hop celebrities performing ONLY their greatest hits. It didn’t matter what decade you were born in, there’s no way you wouldn’t be excited for that line up!

That night ended up being the best night in the history of the world… and I have video to prove it.

Check out the recap from the evening: