Data Dispatch from Afghanistan: Analysis of One US Major’s Incoming Mail in Bagram

Three months ago, I deployed with the 101st Combat Aviation Brigade of the 101st Airborne Division (Air Assault) to Afghanistan as the Experimental Test Pilot for Task Force Destiny. After arriving in Bagram in mid-September to a “B-hut” with bare plywood walls, I realized I needed some wall decorations. So, in 21st century fashion I posted my address on my Facebook page and “hinted” that I might like to receive a letter or postcard from friends and family to pin up and add some color. 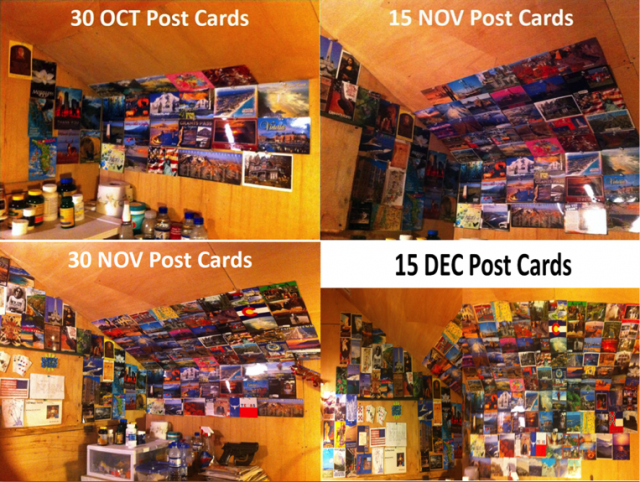 Before going any further, I want to pause and give thanks to everyone who takes the time to send a personal note or care package to someone serving in the military. I am continuously amazed and impressed by the amount of mail we receive—up to 100 packages a day and countless more letters, note cards and postcards (including those addressed to “any soldier”), which are just for our 45-soldier brigade headquarters element. I can truly say that it makes me very proud of America and its caring, supporting citizens; we are all extremely appreciative of the efforts.

Now back to my walls… I started receiving a lot of mail and realized I needed to keep track of it all so I could respond to everyone. So I did what any good Army officer with two engineering degrees would do, I built an Excel spreadsheet. After the spreadsheet started to fill with sender names and descriptions of the cards and packages, I started to wonder if I could take all that raw data and turning it into usable information that would also keep family and friends motivated to keep sending mail!

Since the middle of September, I’ve tracked my mail (postcards, letters/note cards, packages) in two-week time periods, and started analyzing the data to draw. I divided senders into four groups: family, people I knew from Grants Pass, OR (where I grew up), people I met after leaving for West Point (where I went to undergrad) and 2nd order attachments (friends of friends whom I’ve never met).  I also decided to chart state of origin for post cards based on the card photo and not necessarily the sender’s home state. 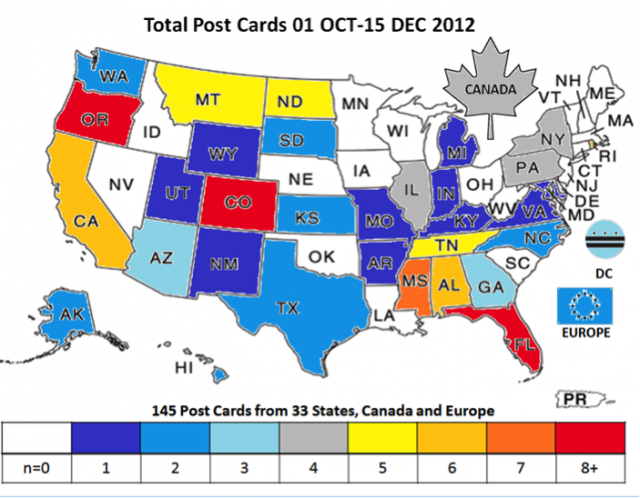 As expected, certain dates result in more incoming mail. For example, with a November birthday, I wasn’t surprised that I received 65 pieces of mail in the first half of the month and 55 in the second half. And with Christmas just around the corner, I’ve already seen an additional influx in mail. 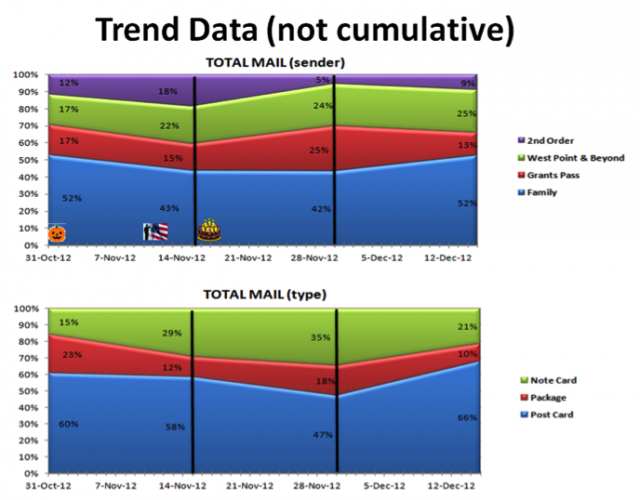 What have I learned from my experiment? 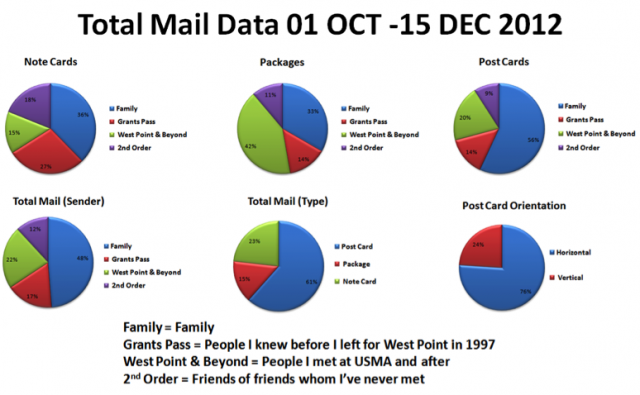 In case you’re wondering what actually gets sent in those packages (yes, there are a lot of sites like this one with care package suggestions) it is generally predictable fare like candy and hygiene items (toothpaste, shampoo and wet wipes are very popular), but I have received some more interesting items: 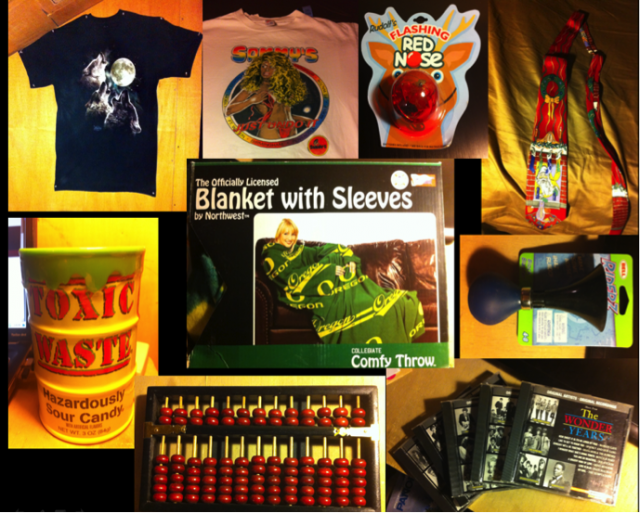 So far I have been able to respond to every person who has sent me mail (over 100 and counting) and it makes life here much more interesting. Thanks to RichRelevance for the opportunity to share my “fun with data” project. I guess it goes to show that it takes more than a war in a secluded country in Southwest Asia to keep an engineer from collecting and analyzing data!

If you’d like to contribute to Major Minor’s data experiment and help make this blog post a significant data event, he can be reached via post card for just 32 cents at the below address!