I’ve now been a father for 26 days, so for the first time, I am on the other side of whatever recognition/acknowledgement rituals might ensue this Father’s Day. Despite centering my career around retail data, the nosey-child-poking-around-the-attic-before-Christmas in me quickly succumbed to the fact I can never predict any gift that my wife comes up with; she has proven time and again her ability to latch (no pun intended) onto that thing I said I wanted in passing last fall, realizing that I would never buy it for myself. No pressure, darling.

So, starting smaller (or larger, depending on your perspective), we recently conducted a study at RichRelevance to observe Father’s Day retail trends, with the hypothesis that there would be differences in shopper behavior in the United States vs. in the United Kingdom, both celebrating the holiday on the same day. Incidentally, there are many retail trends this time of year in addition to Father’s Day, such as gardening, fishing, camping, and graduation; the latter most often gets coupled with Father’s Day, if for no other reason than habitual reliance on the tiredly rhyming promotion “Dads and Grads.”

To get around that problem, we began by modeling Father’s Day seasonality using search terms that explicitly expressed interest in father/dad/father’s day/gifts for dad/etc. While generally similar, US shopper interest in Father’s Day certainly ramps up more steeply in the final days before the shipping cutoff. What does this mean? Perhaps US shoppers procrastinate more so than UK shoppers. Probably more likely the case, US retailers are more aggressive about the shipping cutoff date for this holiday than their British counterparts.

Next, we layered this model across indexed product sales velocities to find candidates for products most likely to be purchased as Father’s Day gifts. Eyeballing the results, we noticed a large volume of pool accessories and maintenance items were bubbling to the top of the list. Similar to November signaling the start of year-end holiday shopping, June seems to have a similar effect on the swimming pool industry. People aren’t in pool mode in May, not even by May 31st. But for some reason, June means summer and summer means time to open up the backyard pool. So, shoppers start stocking up on chlorine tablets, skimmers, filter cartridges, rovers, umbrellas and deck chairs. A minor setback for understanding what awaits dear old Dad. 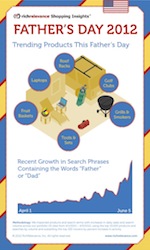 Stripping out the noise, we arrive at our core list of candidate SKUs. Bucketing the list by retailer region (US vs. UK), we looked for patterns in category memberships and some themes started to emerge. Not surprisingly, some items were common to both sides of the pond: barbeques and computing devices such as laptops and tablets were high on both lists. We also observed tools, car accessories (such as roof racks) and golf clubs in the US, luggage and digital cameras in the UK. At first glance, one might surmise that the emergent US dad persona seems to be more of an outdoorsy weekend warrior, whereas the UK dad is more about travel.

We then looked to the search data to enhance the narrative around our UK/US dad personas. In addition to the US weekend warrior, the search behavior data indicated an additional segment of US dads: video gamers/home theater buffs. With sharp increases in headphones, DVDs, games, and gaming consoles (though not TVs), and high correlation to small kitchen appliances—specifically deep fryers and soda makers—the couch potato is A-OK in the USA. 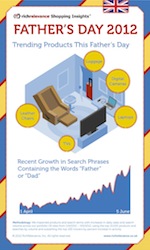 Meanwhile, the UK search data was more about branded apparel and accessories such as watches, wallets, and sunglasses, from brands including Ralph Lauren, Paul Smith, Diesel and Armani. So our UK traveling dad can also expect to be more fashionable come Sunday. But don’t forget the homebodies—they accounted for huge spikes in interest in HDTVs, 3D glasses and living room easy chairs.  That’s right, UK dads can expect to view the EuroCup in style.

All said, I know that I speak for all dads out there when I say that all I really want for Father’s Day is a healthy and happy family…that and breakfast…and maybe an hour or two to read my book.