In my last blog, I demonstrated how the noise in online sales data could be correlated (to some extent) to the weather. What I didn’t tell you was that I was saving my more interesting findings for a separate post. It’s the nature of science that many discoveries are accidental, and so it was for me when I discovered (by checking my y-axes of all things) that the effect of weather pales in comparison to the effect that day of week has on our shopping.

This is a bit obvious in retrospect; I for one frequently buy electronics early in the week in the hopes that I’ll have my cables or components by the weekend, but I know quite a few weekend electronics shoppers. So given an entire population’s varying predilections, how does the timing of our purchases pan out on the national scale?

To show you, I’ve pulled all US (not just Seattle) sales and viewing data for the same four major retailers as before (Home/Furniture, Wholesale, Clothing, and Big Box), from January 2011 to present. I wanted to look not only at when people purchased, but when they viewed products. To isolate noise, I again used a moving average, but this time I iteratively removed outliers as I did so (ie, I created a moving average, removed points outside a set limit from that average, then reapplied the average once those points were removed). The resulting order and views deviations were then plotted by day of week (shown below). 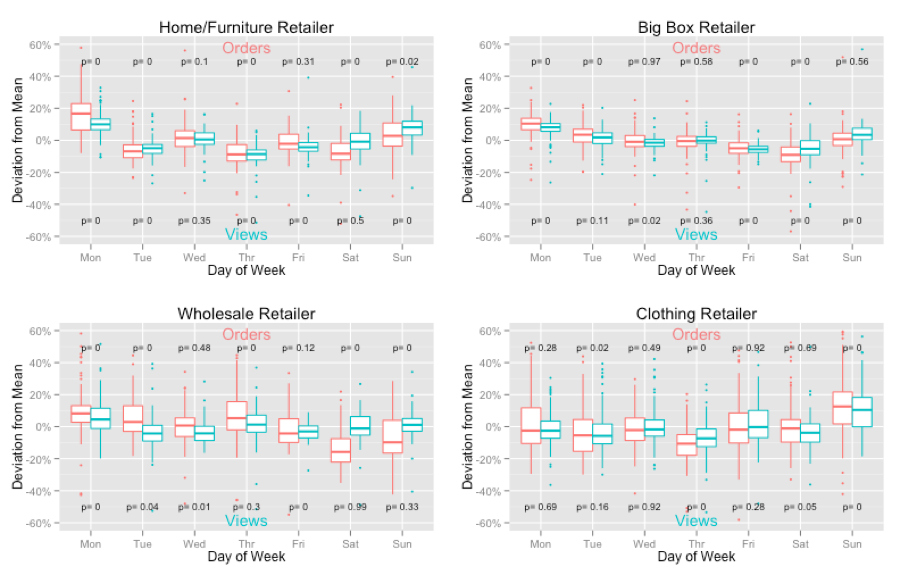 The results are fairly startling. Looking just at orders (in red), every retailer appears to be impacted by day of the week. Indeed, it can account for up to 30% of the scatter in our orders. The differences here are not hard to distinguish: all retailers except for our Clothing retailer have a strong bias for Mondays, particularly the Home/Furniture and Wholesale retailers. Clothing sees greatest sales on Sundays, by a large margin, and has a noticeable midweek slump. Wholesale sees dramatic drops in online sales on Saturday and Sunday, likely because buyers are going to the physical store to pick up bulk supplies. Our Big Box retailer, after a lucrative Monday, has declining sales all week until Sunday. When I look at additional retailers (not shown), the overall national trend is that people buy more on Mondays, with decreasing sales as the week progresses and a low point mid to late week depending on the retailer.

This behavior is even more interesting when analyzed in tandem with viewing behavior (in turquoise). Take our Home/Furniture retailer: they’re getting roughly the same amount of views on Sunday as they are on Monday, but Monday has ~10% higher sales. That tells me that the people shopping on Monday are coming in with a greater intent to buy. Similarly, if you look at the Wholesale retailer, Thursday, Saturday, and Sunday see similar frequencies of views, yet Thursday has close to 20% more orders than either weekend day.

This brings up an important debate. In general we like to think that increased page views equates to sales–if we get 100 views of an item, it will typically result in x sales. So is Monday more valuable than Sunday for each site, or perhaps more significantly, for an ad campaign? If different audiences are viewing and shopping on each day, then maybe so, but if many shoppers surf the web on weekends in preparation for their Monday shopping, then the weekend view share is actually just as valuable as the Monday view share. It’s a difficult comparison, and one I don’t have the space to fully flesh out in this particular blog post.

As fun as it’s been to pry into the great, mysterious shopping equation of life, I’m impressed most all when looking at this data with how much we still don’t know. Between weather, sunlight, and day of week, we might optimistically explain 50% of day-to-day noise … but what’s pushing the levers on the other 50%?