Scaling the peaks of Black Friday 2014: Shopping Insights and Metrics

We’ve finally slowed down enough to reflect on how we did in 2014 and the final holiday push: pretty darn great if I may say so myself. We ended another year at 100% uptime all year with record loads and HUGE growth.

The graph below shows 2014 traffic, as measured in requests per second (RPS), highlighting the final Devil’s Horns through Jan 5. You can see Thanksgiving through Cyber Week and the dips in shopping on Christmas and New Years pretty clearly. Historically, the traffic we settle at by mid-January becomes the baseline for the next year. We typically gain online traffic each year from new customers but also see organic growth in the number of shoppers.

Each color below represents a different data center location.

Below is a close up of the Devil’s Horns with page views on the left, and days across the bottom. The colors represent the years 2008 to present. We peaked a bit over 400M RPS (graphing smooths the numbers by averaging across time, making them look lower). 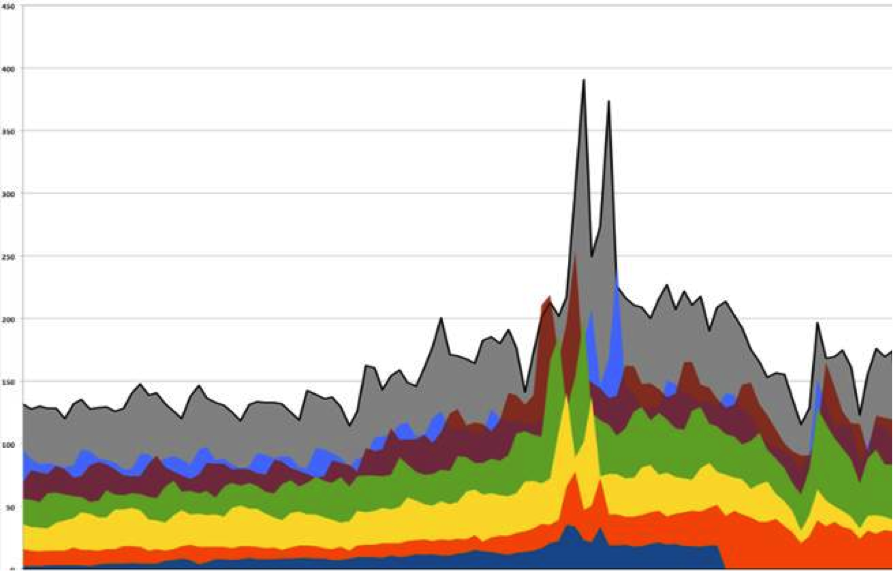 Finally, here are some fun stats for December 2014:

It’s been a mere 36 months since I wrote my last blog entry on Black Friday/Cyber Monday traffic. So what has changed? Nothing, and A LOT! We are still up 100% on our front-end services (52 months and counting). We still have the industry leading response rates and infrastructure platform.

But in the past 5 days, we served:

This year, we also invested in a great monitoring product, DataDog, as well as a fantastic scalable infrastructure. With DataDog we have the ability to track granular and custom metrics for that new infrastructure in a single place. Every year, I track the metrics of a number of IT operations that include requests per second, response times, model builds, transfer rates, load and page views (what I call the Devil’s Horns), for our 220+ global customers on over 500 sites for the most pivotal shopping weekend of the year. On my “Devil’s Horns” graph, the left “horn” shows Black Friday views and the right one shows Cyber Monday, with the dip further to the right being Christmas and Boxing Day spike following. In the graphs below, the gray shows current page views in millions, with each color below representing the previous 6 years (2008 to current).

Here are some highlights from our journey tracking the Devil’s Horns of 2014.

Here’s how we looked as we started to map the Devil’s Horns graph last week. 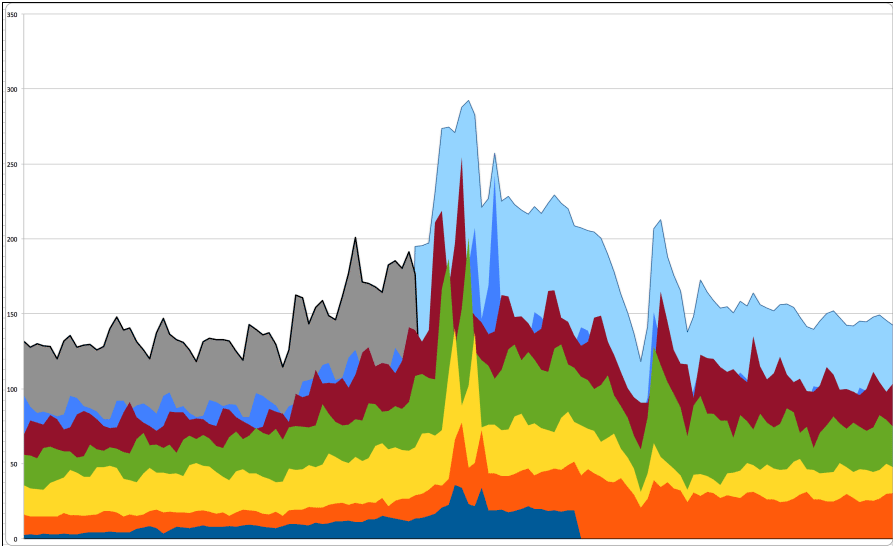 Gray is 2014 recorded traffic for the days leading up to Thanksgiving. Light blue is projected traffic estimated from past patterns and current sizes. Scale = Millions of Page Views.

Gray is 2014 recorded traffic for the days leading up to and including Black Friday. Light blue is projected traffic estimated from past patterns and current sizes. Scale = Millions of Page Views.

It seems Thanksgiving has creeped its way to establish a solid Thanksgiving/Black Friday/Cyber Monday retail shopping trifecta! #ChristmasCreepIsReal. But we had another reason to give thanks today: no calls or merchant problems raised. That’s great news.

Above is the overnight RPS graph zoomed in to show that weird sudden peak. I’m hoping the {rr} team in the EU was buying my team some treats.

Let’s also take a quick look below at the same RPS Graph worldwide for that 48 hours, from Thursday through Friday, to see that overnight traffic. That’s a lot of sleepy shoppers. 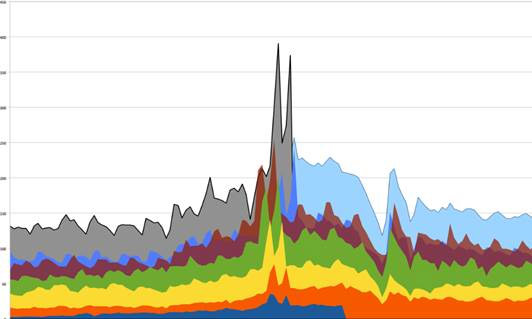 Gray is 2014 recorded traffic for the days leading up to and including Cyber Monday. Light blue is projected traffic estimated from past patterns and current sizes. Scale = Millions of Page Views.

I mentioned above that we greatly expanded our monitoring and our ability to see further into our solutions than ever before. DataDog, our new monitoring tool is very granular—down to the millisecond when we need it to be—and it provides our developers the ability to build custom monitoring into their code. In fact, in 2015, you’ll want to keep a lookout for a public-facing status page on our metrics.

I do get a bit reflective this time of year. I’m thankful to be blessed with one of the best Operations team in my career; the core group has been with me through five of these past holidays (I did say 52 months and running at 100% uptime, right?). I’m thankful to have the best engineers, architecture and infrastructure in the industry and the phenomenal vision of our Product Team and CEO; and of course, thankful to have the best retail merchants as my customers